Above: A Skeena River steelhead caught on a dead-drifted Black Tube Bomber ™  Picture with courtesy of Mr. Chad Black

Wake fly,  dry fly, and skating flies are fishing forms closely associated with fly fishing for steelhead. Way’s of fishing only truly efficient when conditions and time are right, but anglers will prepare and gear up for the climax of fly fishing with great anticipation. Some steelhead anglers would say: Fishing on the top – is the only true way to catch this great fish. 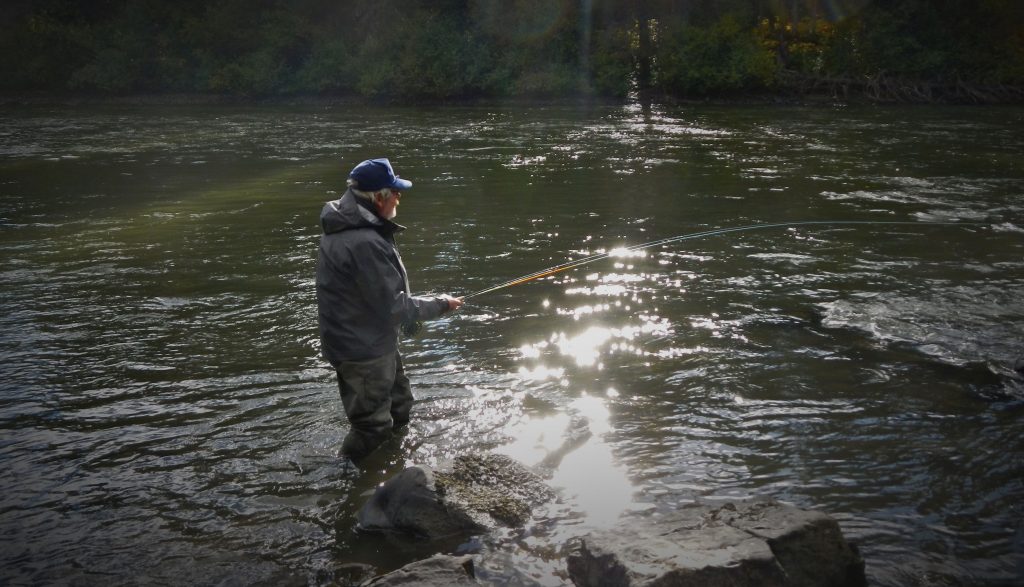 As all Salmonidae, the steelhead-parr have their focus pointed upwards a good part of the season, and fishing dry flies at dead-drift * is one straight forward method to hook up with adult steelhead

* Fishing at dead-drift: This morbid sentence is a term explaining a classic technique where the anglers leave the fly drifting motionless on the river surface – as opposed to waking the fly 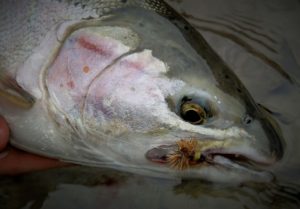 Mr Roderick Haig-Brown, author of many books on sport and a dedicated fly fisherman is considered to be the true pioneer in the discipline surface fishing for steelhead. Mr Haig-Brown initially discovering some of the key elements in steelhead flies that led to the design of steelhead wake flies and wake fly fishing as we know it today.

Above: A beautiful hen fish caught on a Steelhead Bee A fly devices by Mr Roderick Haig-Brown from Vancouver. 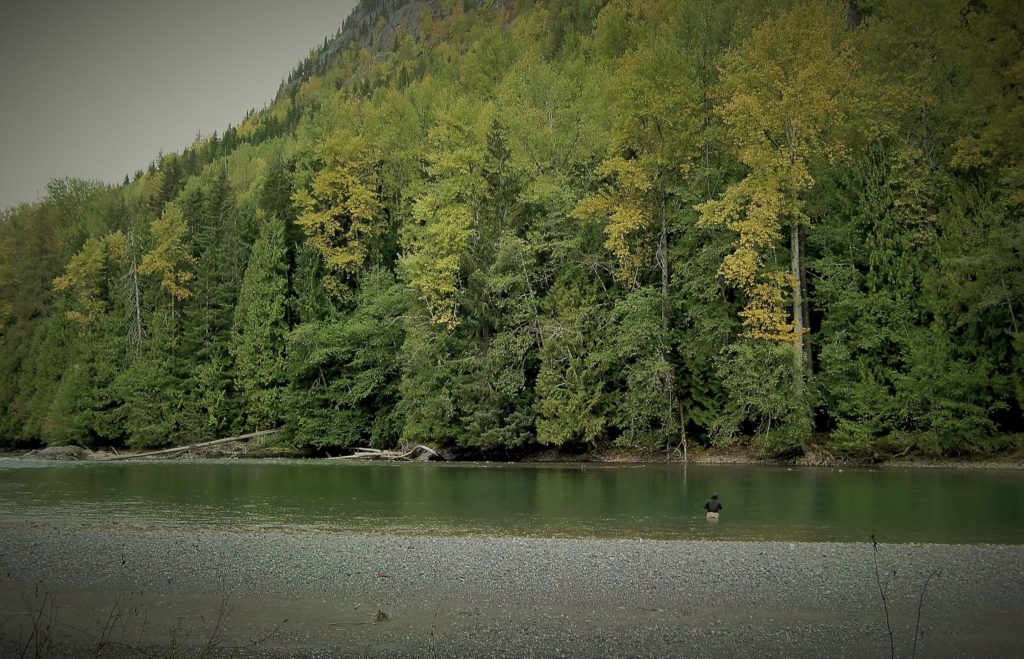 Above: Superior holding pool for steelhead on the Skeena River system – Big boulders and safety in the medium deep water, will have the steelhead resting in these areas. A well presented dead drifting dry fly or a slowly moving wake fly like the Grantham Sedge or Steelhead Beetle could bring the fish to the oily surface.  Picture with courtesy of Chad Black Nicholas Dean Lodge

Dead-Drifting a dry fly in one minute

The steelhead is a highly surface active Salmonidae and fishing them on the top is regarded as the highest form of fly fishing. During summer and long into Autumn the steelhead will react aggressively to flies waked or skated across the surface. Steelhead anglers have built flies for this fishing for decades – Flies that will work on the top in both rough and calm water. Wake fly patterns like Waller Walker, Wag`s Walker, Pooldozer, Air B.C, The Ska-Opper – and The Grantham Sedge, to mention but a few. 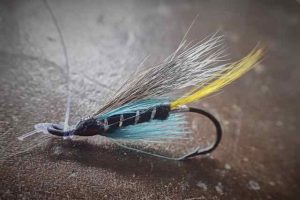 Dragging a regular wet flies in the surface (Portland Hitch) or using tiny tube flies fished on an angle is a long-established technique for Atlantic salmon that also work fine for steelhead. One could call Riffling Hitch fishing: a quiet way of skating or waking a fly – but it would not be all correct as the actual presentation of the fly could be different on a steelhead river versus a salmon river – To see more on the riffling hitch technique see our pages on the subject

Bulky buoyant material like deer-hair and EVA-foam (Ethylene vinyl acetate) – Is widely used in conventional steelhead wake flies. The shape of the fly and the sheer bulkiness will also work to generate the wake.

Famous versions of the Bomber have been honed into shape to perform well and on the surface – when fished across the river.

We have reworked the way of doing steelhead wake flies – By using the riffling hitch system on steelhead patters – You no longer have to work with demanding hitch knots or technical advice on what position the knot has to sit in correlation to the slope of the hook and the flow of the river etc.

Simply insert the leader through the hole in the belly of the tube – tie on a hook of your choice – and you good to go. 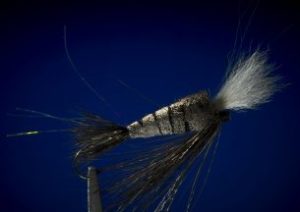 You may also want to try our way of designing steelhead wake flies: Tied on a tube with the leader entering at an angle thereby forcing the fly to the surface.

The Waller Walker – A wake fly icon. Designed by steelhead angler Mr Lani Waller. Supposedly the design was forced through by film-maker Mr John Fabio, who was filming Mr Waller. Mr Fabio wanted a fly that would show up on the river surface – so it could be seen properly on film. Mr Walker then made the fly that should become the grandfather of modern wake flies

Photo:  We took the liberty of transforming the wake fly icon to a Fishmadman Tube Waller Walker 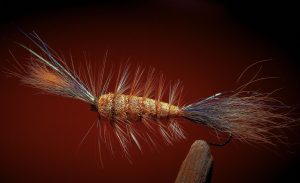 Wake version of the Bomber

It is said that the first Bomber pattern was designed by a Mr E. Smith in the 1960s. Mr Smith designed the fly as a commotion fly to fish Atlantic Salmon in the Miramichi River in New Brunswick. The pattern proved very successful on salmon and soon spread to steelhead anglers in the West who changed the overall design to enable it to wake better. Some even shape their Bomber to work with a dive and pop-up motion 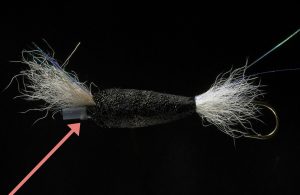 Photo :  The famous Moose Turd wake fly by Bill McMillan – done the Fishmadman way on our Riffling Hitch Tube – The arrow show`s the entrance hole for the leader. This is a very dependable way of getting a fly pattern to pull to the surface and wake.  Big and long wake fly patterns benefit much from this transition – like the tube fly fitted with a small wide gape hook (like a 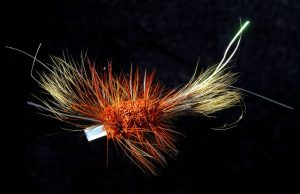 coarse fishing carp hook) – will weigh less than a conventional fly tied on a long shank hook – furthermore, tube fly patterns do not have issues with leverage that so often is associated with flies tied on bigger single hooks. The fly wake´s effortlessly and work´s very lively on the surface. The tube allows for multiple choice of hooks and hook settings.

Right:  Our version of the classic steelhead fly the Rusty Brown Bomber Tied on our Riffling Hitch tube 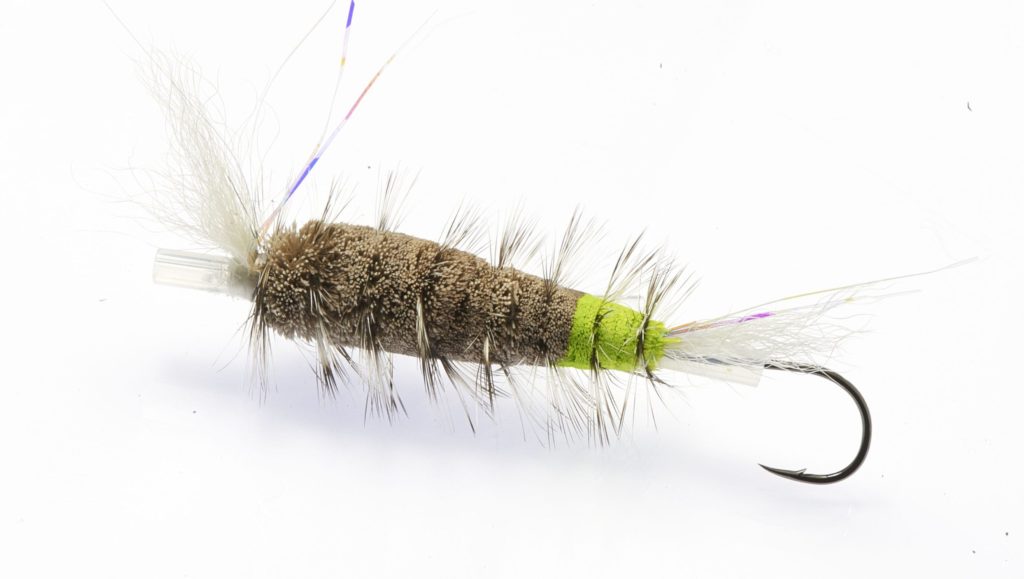 We have been fortunate to work with some longtime steelhead anglers on a new Bomber project – producing some unique versions of the Bomber styled for rivers like; The Bulkley, Skeena, Kispiox and the Babine. 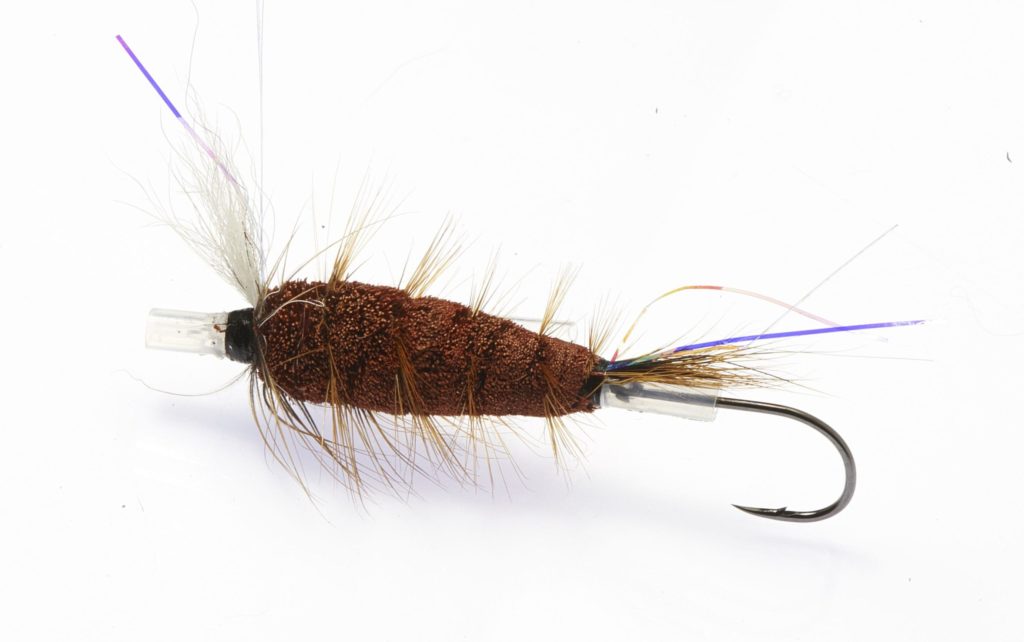 Above: The Brown Bomber wake fly 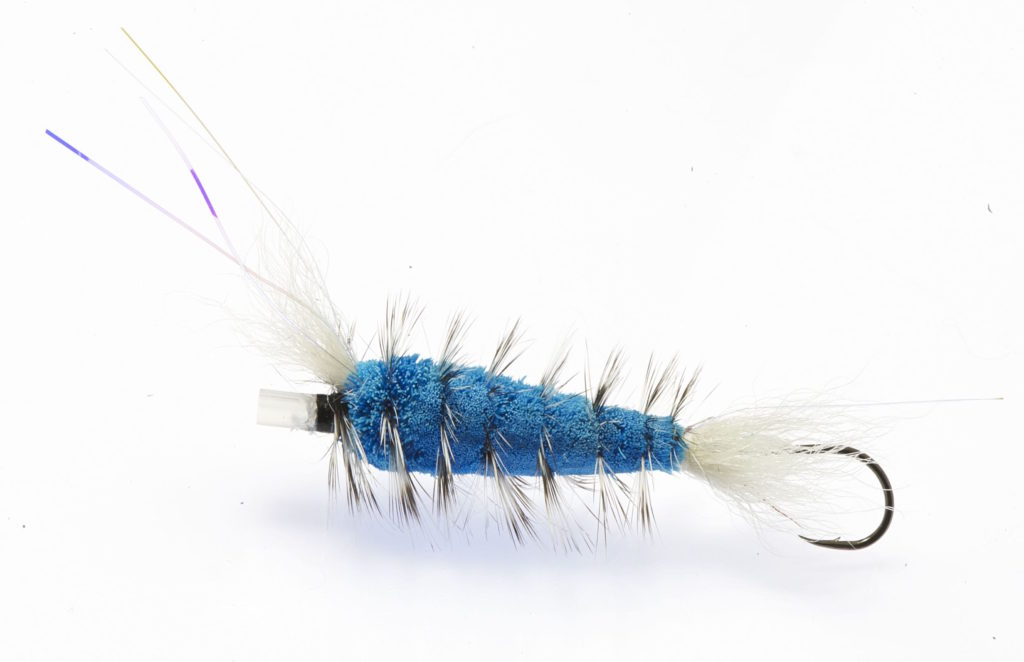 Above: A favourite Bomber colour both for steelhead and Atlantic Salmon: The Aqua Blue Bomber wake fly

Wake and skate fly with a very different approach 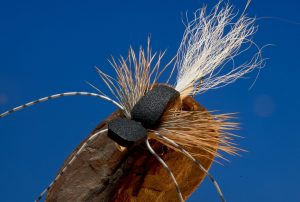 Some top water flies for steelhead is made to plow through the surface some are made to create a moderate wake, others like the Ska-Opper or the Quigley’s Dragon Gurgler is designed for a more active life in the surface: bobbing, making a wake and spitting water. 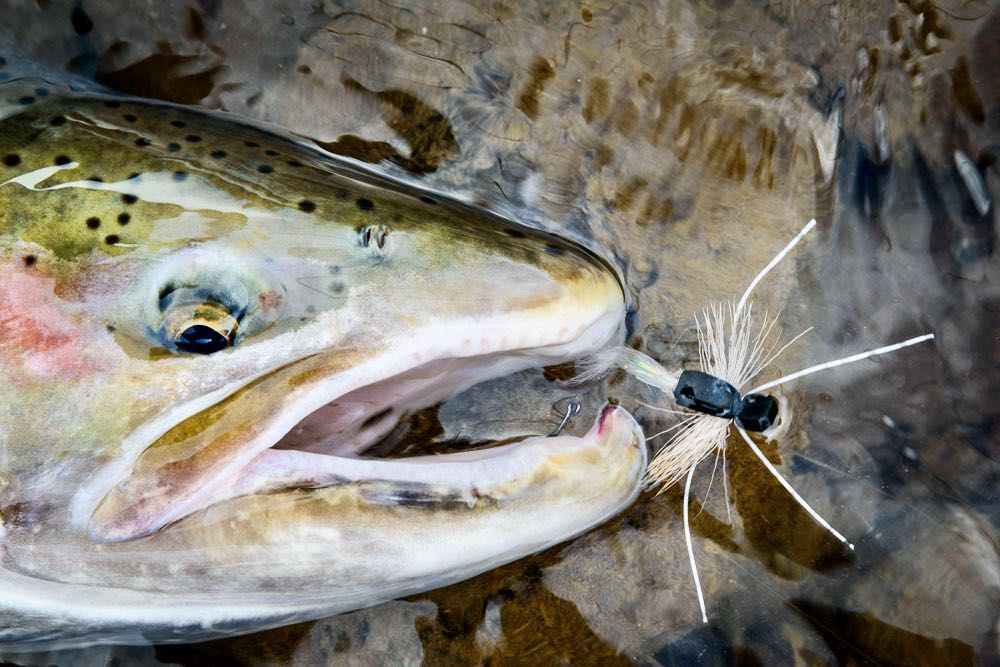 See the Ska-opper in use 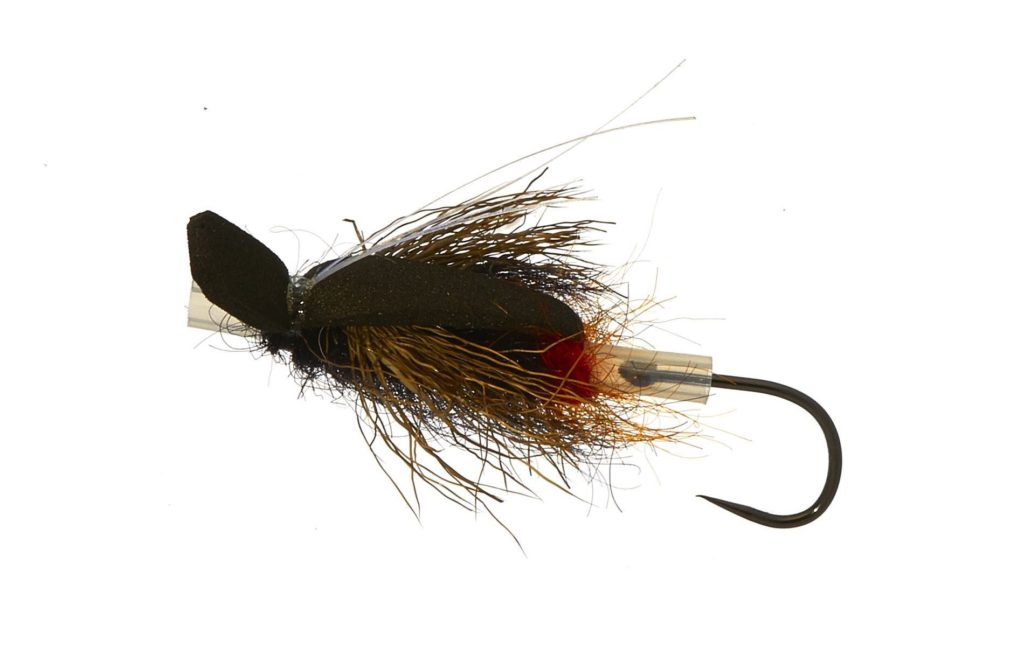 The Steelhead Beetle a wake fly pattern devised by Mr. Rob Brown, a well-known angler in Terrace BC. Here tied the Fishmadman way on our Riffling Hitch Tube – A wake fly that will work in rougher waters. 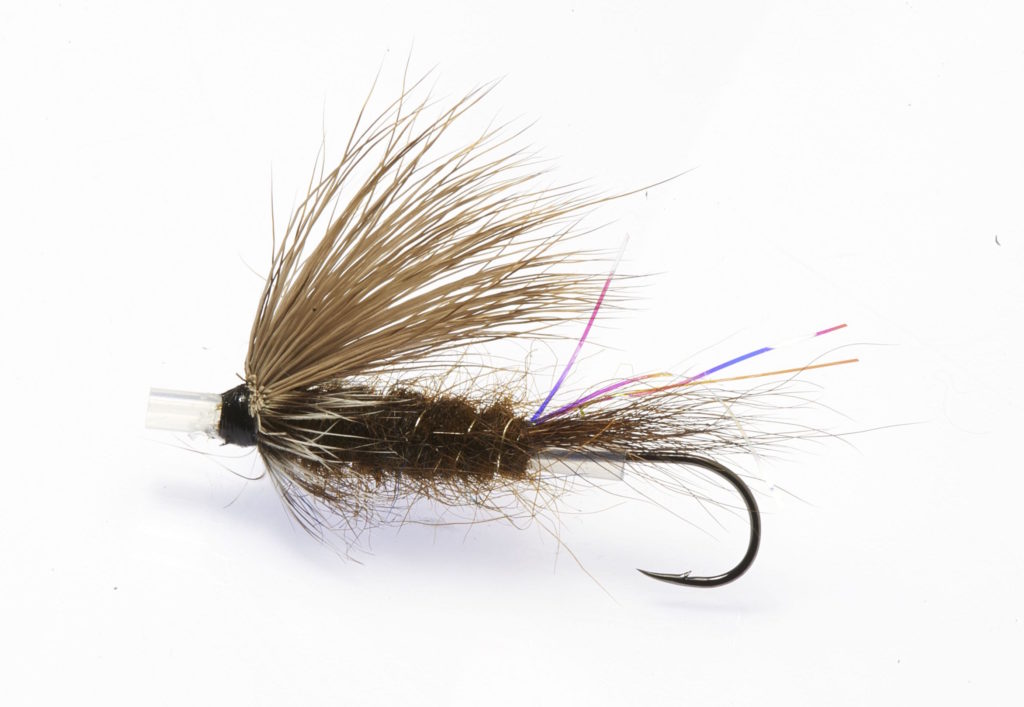 A classic steelhead wake fly pattern designed by Mr Harry Lemire in 1962. This pattern was once everybody’s favourite fly and a “must-have wake fly” in the fly box – but over time flies that wake with greater ease was to substitute the Grease Liner.

We tie the Grease liner on our Riffling Hitch tube and you will find that it wakes as well as any modern wake fly. 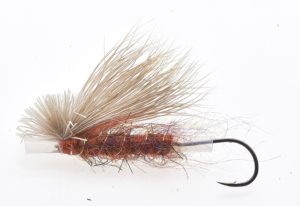 The Grantham Sedge a fly to create a small wake

Here we have made a version of the superb Grantham Sedge wake fly – Designed by Mr Ron Grantham – Fly is tied on our Riffling Hitch Tube. The tube will allow the hook to be turned in various positions facing down, up or on an angle allowing for different hook-up options. 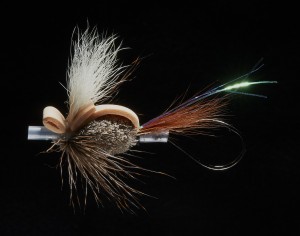 The Quigley’s Dragon Gurgler wake fly originally devised by Mr Bob Quigley .. We have designed this version on Hitch Tube together with steelhead anglers from BC 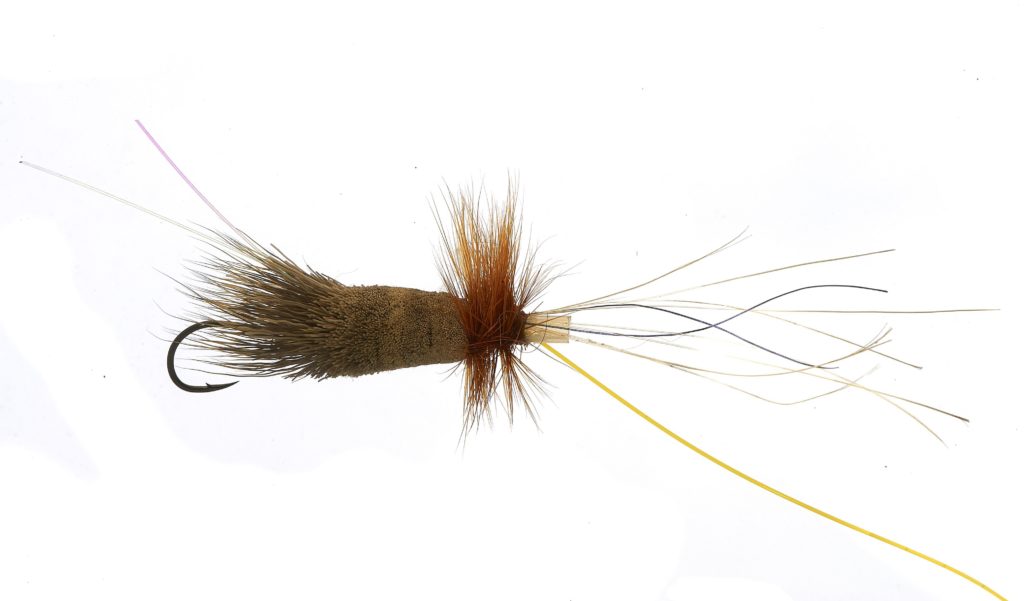 The WAKE version of our Monster Tube Caddis – A special design we have perfected over the last years – Developed for steelhead fishing – but has also proved to work for salmon in lakes and rivers – A unique caddisfly imitation to bring curious fish to the top. Buy the wake Monster Tube Caddis here 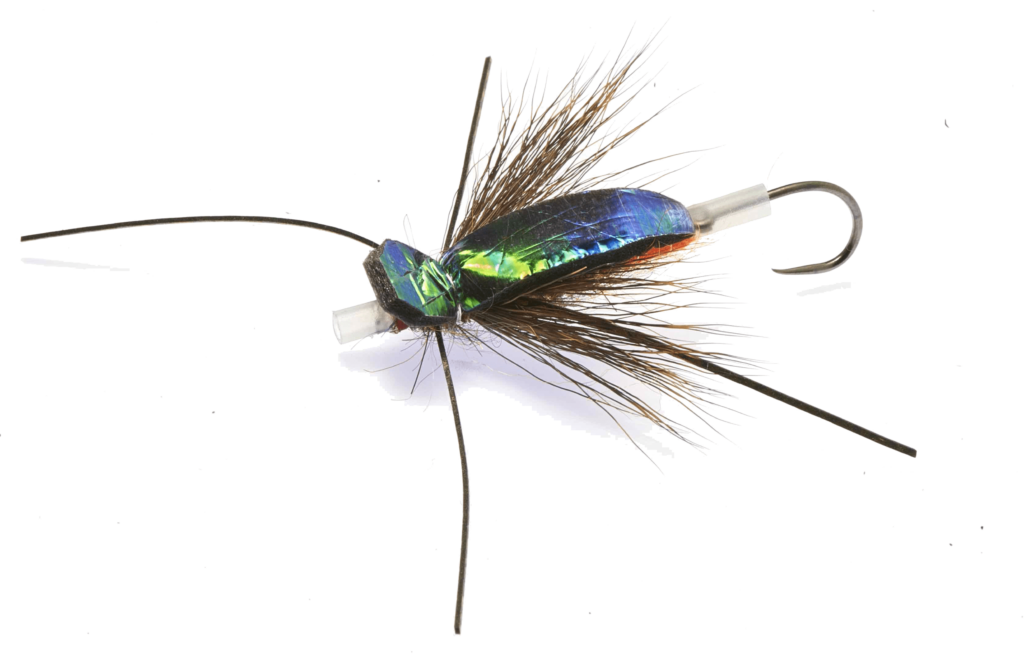 Steelhead anglers have been fishing this new wake fly pattern on different rivers in British Columbia and Oregon the summer of 2014 and the results have been great. It was later named The FlashBack Bug

We have tied it in 3 sizes similar to flies tied on # 1 – 4 – 8 hooks
It features our Riffling Hitch tube system and wakes perfectly in rough and calm water.

See how we tie the Grantham Sedge On Tube 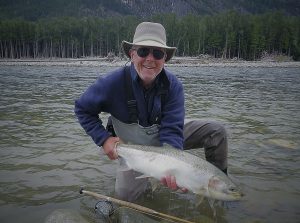 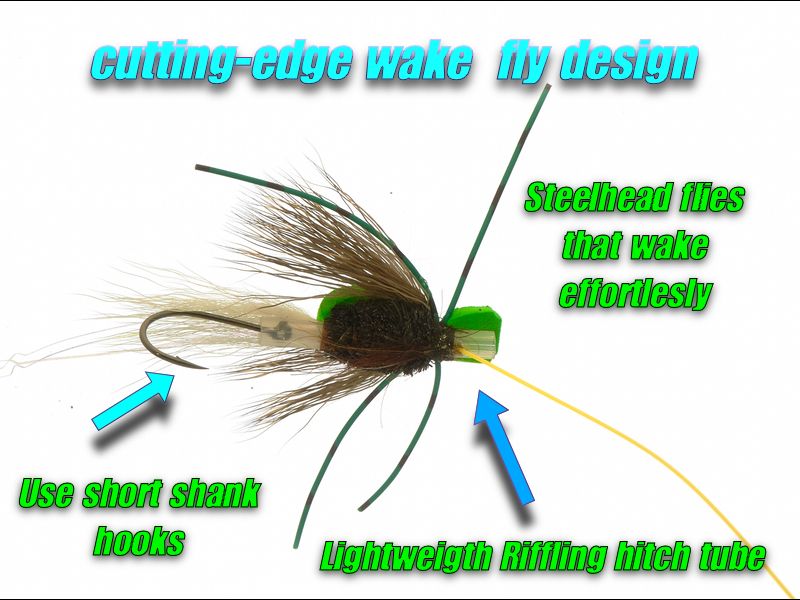 We have worked a few years to develop this neat way to make steelhead flies wake effortlessly.

We used our Riffling Hitch tube system and altered the technique to work with known steelhead patterns – Guides and dedicated steelhead anglers have helped us select and hone patterns that work in slow and turbulent water. The patterns we have chosen to produce are flies that normally would be tied on long shank hooks – with material that floats – but our Riffling Hitch-tube system will make your flies wake regardless the usage of  buoyant material, and we hope that a new generation of steelhead-wake-patterns will be developed on account of our Riffling Hitch Tube system… 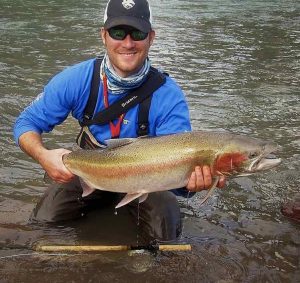 Written by top water pro and camp manager; Chad Black from Nicholas Dean Lodge Situated in the Lower Skeena Region. Terrace, BC, Canada. Chad Black and some of the guides from the lodge has helped us make our wake fly series –
Check out the tube wake flies we do

Did you like our steelhead wake page? - We try to develop wake flies for steelheads on a regular basis - During the wake fly season in BC we have some of the finest steelheaders fishing with them... Join our newsletter and get inspiration to do your own - tube wake flies

Join our Newsletter
Back To Top