On this page, we will try to show you some controversial facts about Atlantic salmon behavior only a few know about. Some Atlantic salmon do actually eat food while they are in freshwater – Maybe not great amount of food but enough to make it worth looking into.

Do salmon feed in freshwater?

Memory of food  – Is that what salmon fishing is all about ?

Do salmon feed in freshwater – or don’t they ? Most anglers you know will probably say no – But modern science tells us some of them actually do eat food …occasionally 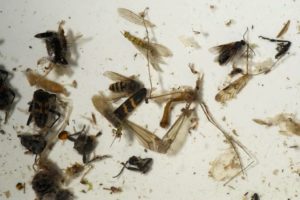 Even though It is generally known that adult salmon will leave behind its greedy way of life and go into a state of anorexia when entering freshwater – It is a myth that the salmon won’t eat while staying in fresh water – The angler fishing with a worm will also tell you otherwise as the salmon now and then will swallow worm and hook.

New science shows examples of eating behaviour among up to 40 % of the adult salmon in the region of Northern Norway. In some rivers, salmon diet would include both land and water insects.

Here: Salmon feed in freshwater. Both land and river Insects was found in the stomach of this 4-kilo sea lice`d  salmon caught In the very North of Norway

We as anglers rely strongly on the salmon’s ability to remember the idea of eating – as the salmon most of us try to catch haven’t entered the river to feed but to spawn. But we catch them on a regular basis and most of the time we use gadgets that is closely association with the food salmon know so well. 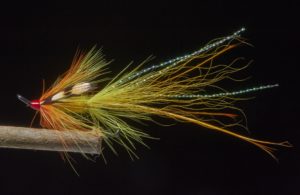 It would just be to easy to accredit the success of particular flies or fishing methods like riffling hitch, dry fly fishing or shrimp flies – to insect and sea life as we see it today – Hunting skills and levels of curiosity with various species of fish could very well have been formed 10´s of millions of years ago when the insect and animal life might have looked different from today.

It is well-known that a prawn salmon fly pattern like the General Practitioner fly work much better in some rivers than in others. The British salmon and in particular the Irish salmon seems to be more interested in shrimp-flies like the Pot Bellied Pig seen in photo – more so than salmon in regions of Scandinavia … Saying this I recognize that it is hard to say if most of our sub-flies in fact, is interpreted by salmon as prawns and shrimps and we 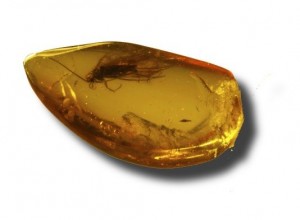 as fly tiers work unpremeditated with the prawn-theme all the time.

Right: A small caddisfly locked in time and space in this piece of amber from the Eocene epoch, lasting from about 56 to 34 million years ago – The caddisfly insect is found fossilized in rock dating even further back  – to the Triassic about 250 to 200 million years ago – It could be neat to believe that the success with the Riffling Hitch techniques was linked with the life and behaviour of the caddisfly. 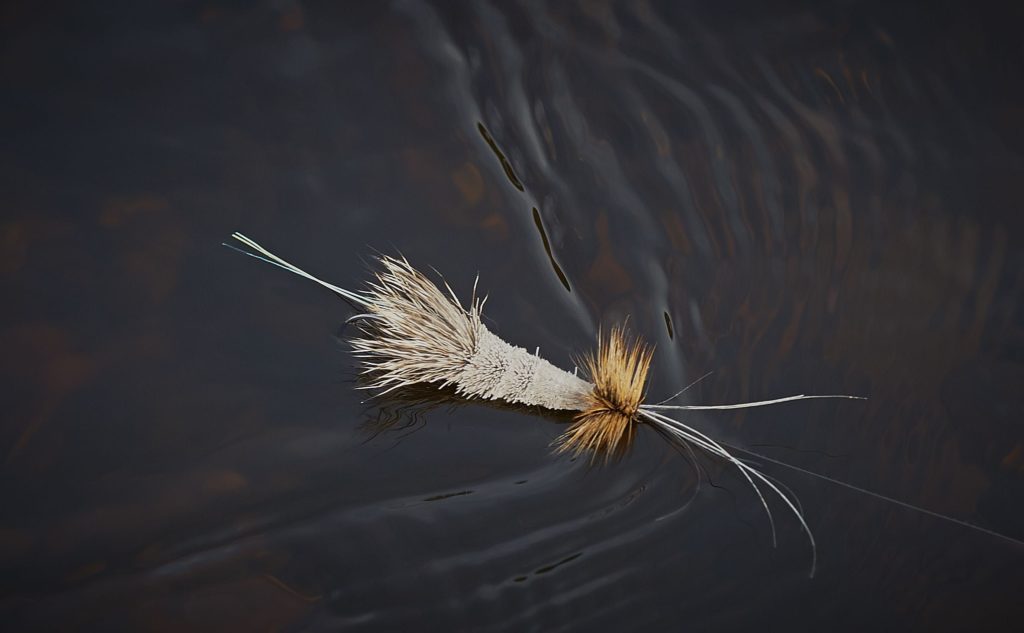 Salmon feeding in the surface

Why do the salmon take a big floating Bomber? – You will ask yourself this question now and then when you fish salmon on a dry fly.  The short answer is;  there is no clear reason, but the truth of the matter is;  that the talent to find and capture food is interlinked with the Atlantic salmon’s success across the Northern hemisphere – and finding food in the surface is an axis point in this success of the salmon parr´s life in the river.

As soon as insects start flying the salmon parr has attention pointed upwards…It is, in fact, these surface hunting abilities that we tap into when we try to catch the salmon on our salmon dry flies.

Above: The Monster Tube Caddis. A caricature of the caddisfly from the limnephilidae family it was made to portray. Often it is not exact copies of prey that get the salmon going – sometimes it need only to be a minor detail or a rough design that triggers a reaction.

Small film I made of salmon parr feeding on the surface 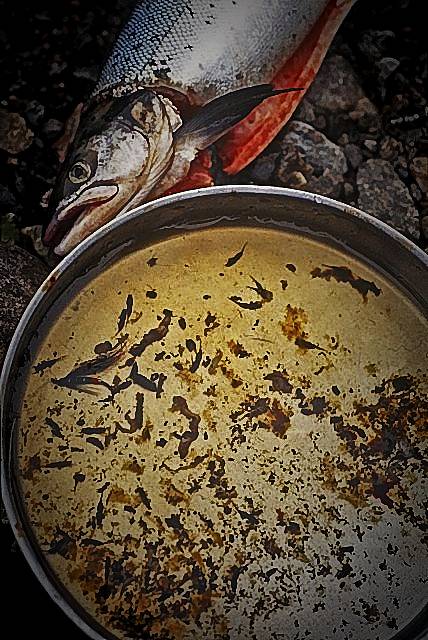 A big Bomber dry fly is not a problem

With lots of insects on the water adult salmon in some rivers may part-take in the feast alongside its trout cousin – and rise to the stream of hatching insects as frequent as the trout.

Such rare occasions could call upon a fly that would match the hatch so to speak – But on a regular basis, it is rarely necessary to match the hatch as salmon will respond well to flies that look like big caricatures and not imitations of the insect that it is meant to portrait.

The main characteristic that we (the angler) want to feature in our dry flies is the element of entrapment – We actually want to build a fly that will rest in the surface showing little under water.

Some of the insects salmon parr feed on 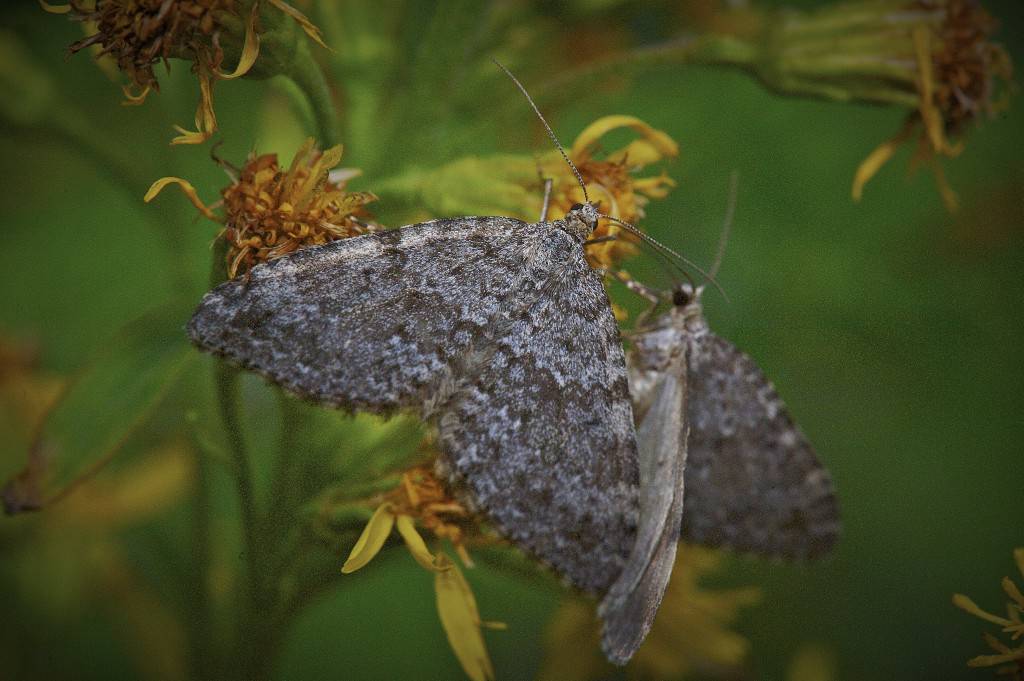 Above: an all important terrestrial in Northern Scandinavia is the moth of the Geometridae family.

A large group of insects that now and then comes in contact with the water and salmon.

Salmon parr will follow this insect closely when it flutters across the river – and if given the chance they will grab it jumping clear out of the water.

Personally, I believe that it is the bountifulness of these insects that makes the white and gray and White Bomber pattern particularly good in some river systems in the far north of Norway. 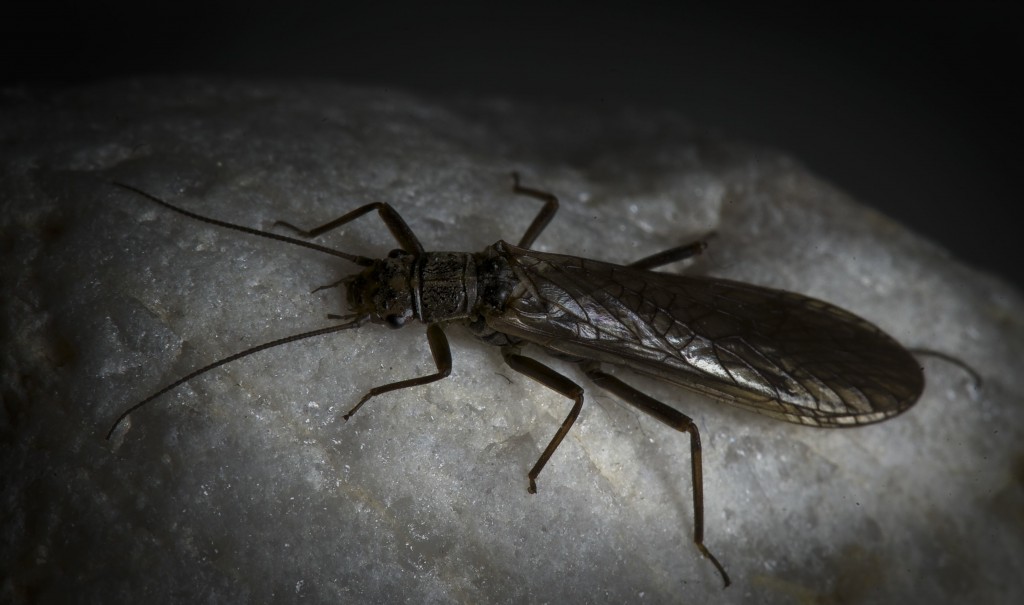 Above: a Nordic Stonefly: One little critter I have found inside adult salmon over the years, sometimes species of the stonefly family so small that one have to look closely to see it is a stonefly 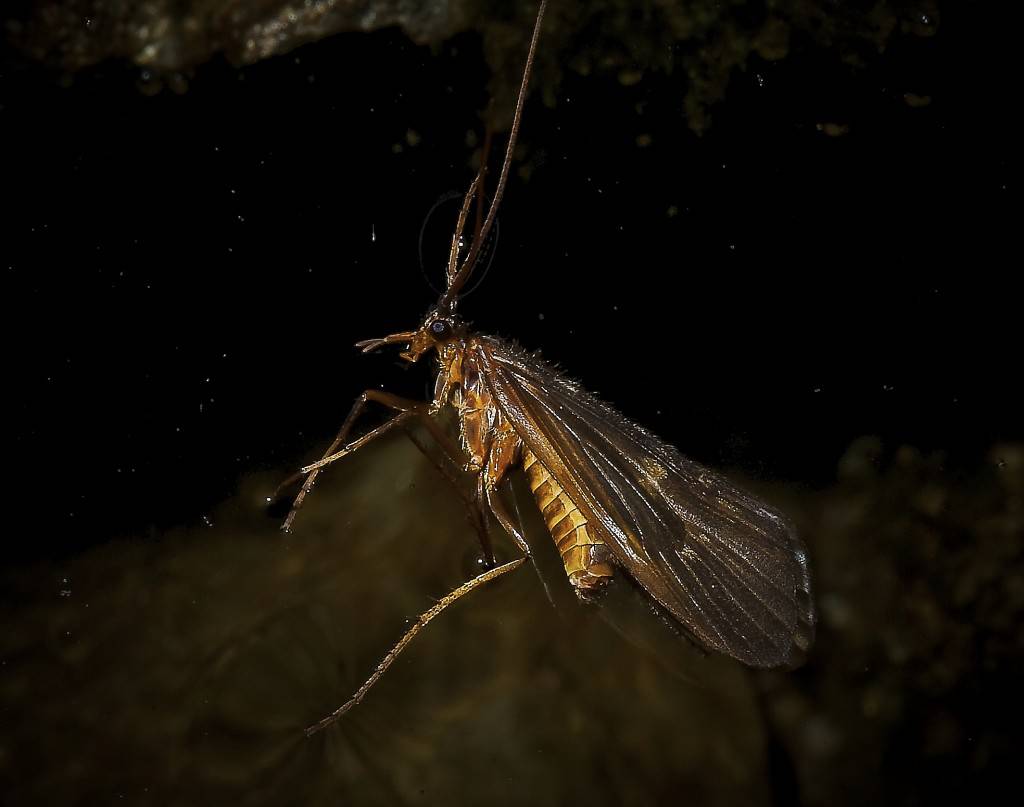 Above: A dead adult caddisfly from the limnephilidae family – this specimen measures more than two centimetres. (excluding the long antennas) and is a sought after meal by any carnivore

These remarkable insects can be seen by the riverbank in the thousands during summer months. Members of the caddisfly family are also some of the earliest and last flying insects to be found at the river bank. 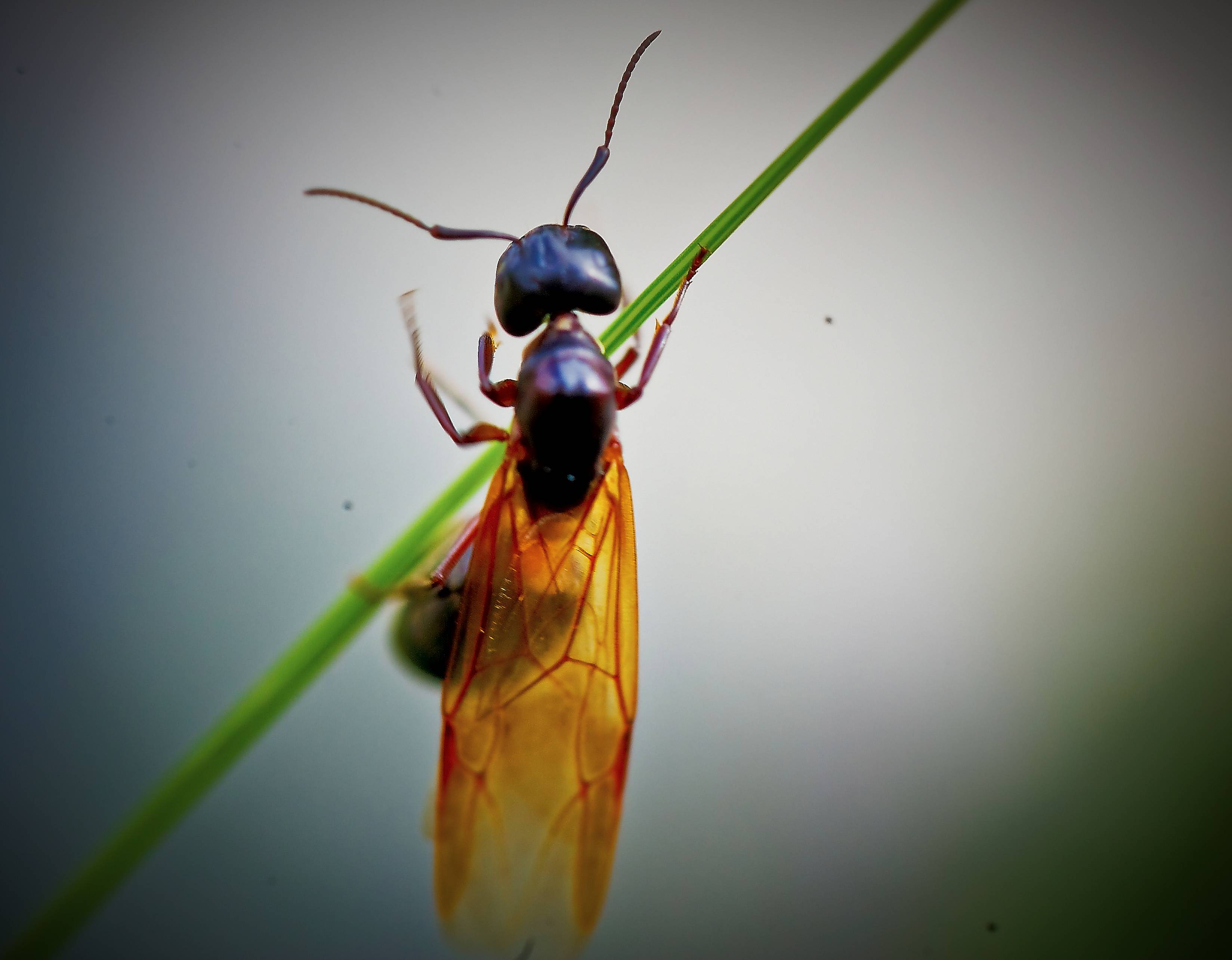 Above: a big forest ant family Formicidae family Still with its wings intact.

This fellow measures more than 1,3 centimetres. During summer month`s, swarms of these resilient insects will leave their ant-hill´s to find new territory. Thousands of them will end up in the river system – where salmon parr, trout and adult salmon will find them. Yet another little bug worthwhile having represented in the fly box.

What do salmon eat at sea ? 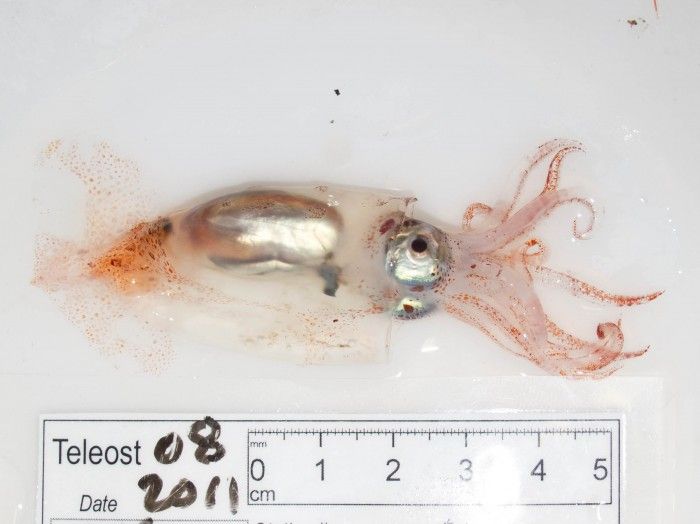 Science will tell us that the Atlantic salmon is a highly skilled and opportunistic predator that will feed on a wider selection of animal – ranging from tiny crustaceans, shrimps, squid, worms and fish – It will hunt in both deep and relatively shallow water in very different lighting.

There is no doubt that the appearance and behaviour of these many animals that salmon hunt for – is somewhat mirrored in the salmon flies we use.

Was it a detail in the fly? – Was it the fly as a whole ? – that tricked the salmon into biting? – We don’t know yet

Fish & shrimp was on the menu 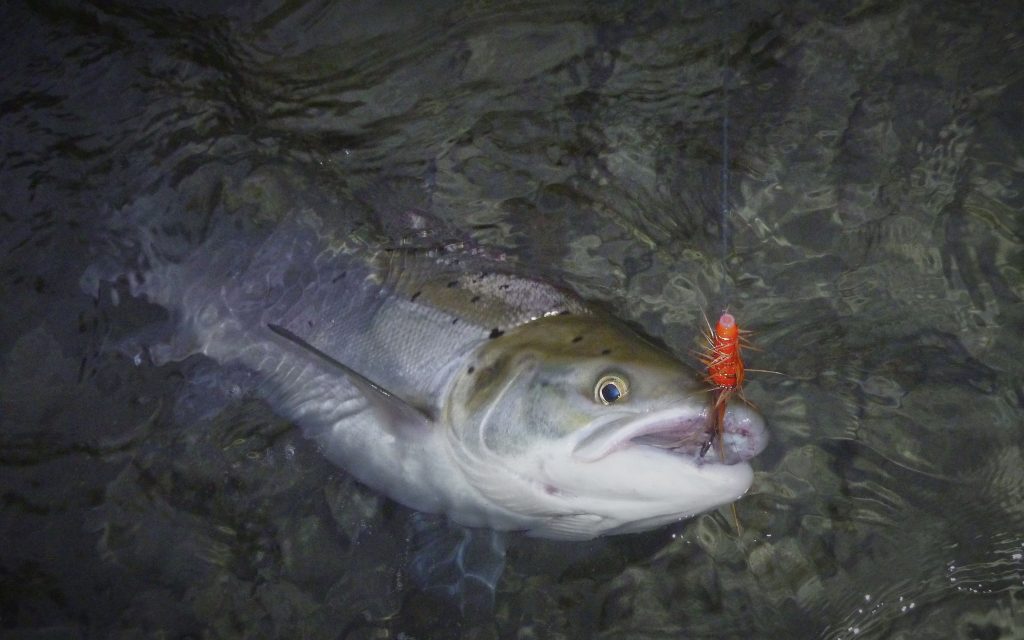 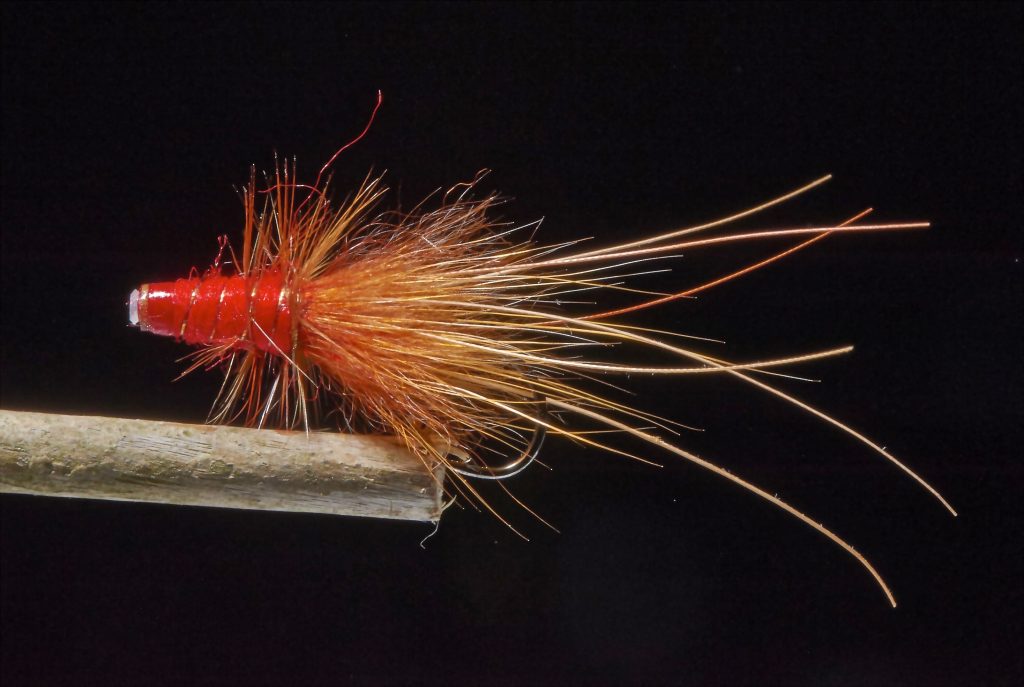 Left: Atlantic Salmon just love shrimp flies. Studies show that a substantial percentage of their prey is shrimp. Here the spellbinding Frances Fly – Scrimp and prawn flies like the General Practitioner and the Frances Fly can have an overwhelming effect on Atlantic salmon – But not all salmon is taken by the charms of the shrimp.

Interesting studies into salmon feeding at high seas in the North-east Atlantic by; biologist Jacobsen, J. A., and Hansen, L. P.  show that shrimps accounted for 95% of the food in number, but only about 30% by weight

By weight, 66% of the stomach content was fish, particularly mesopelagic fish. Some larger pelagic fish such as herring, blue whiting, and mackerel were also part of the dies.

Fish and crustacean prey accounted for 96% of the weight of all prey eaten by salmon but the report also mention a small percentage of  birds and bird remains also being part of the salmon stomach contend !!

Salmon feeding in the North Atlantic

Feeding on the way to the river

Fish is the bulk part of the salmon diet and fresh salmon or trout steaming in from the feeding grounds at high seas might even have fresh food in their stomach – prey they could have caught on their way to the estuary or river mouth.

These salmon are as aggressive as they come, some with a crisp memory of their greedy life at sea and eager to hit your salmon fly – These stupid silver ones is the fish most anglers will come to know and so often tie flies to catch. 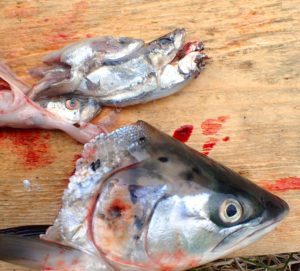 Above: close to the river mouth some Atlantic salmon may hunt. This freshly caught July fish had partly dissolved herring in the stomach. 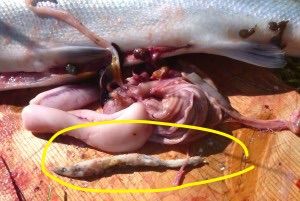 Above: Freshly caught grills shortly after the tide with a sand eel in its stomach. When season progress – river levels drop over summer…Salmon might stay for longer duration in the river mouth and estuary… Not feeding and with empty guts. 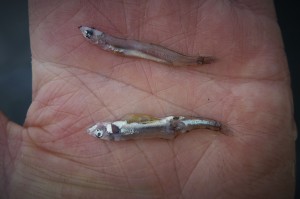 Above: yet another example on this topic: Two well-preserved juvenile herrings found in the stomach of Atlantic salmon – caught in the lower part of the river only few hours into the tide. Fish that have fed non-stop until entering the river are aggressive and an easy catch

Science tells us that the fresh silver salmon returning to the river has resources within the structure of its eyes to see the light with short wavelength like green and bluish colors… something that it has used to detect prey and enemies in the vast water columns at high seas.

Right: Flies like this big Sunray Shadow has a good effect on fresh running salmon right in from high seas

During the season, the salmon’s ability to focus on light with short wavelength will change progressively to new capability’s.

Read more about the salmon´s ability to see colors here

Read about flies for fresh aggressive salmon on our pages:

Read about types of salmon found in the river system

We hope you enjoyed this special page on salmon feeding behaviour - We try to do our best and get you the greatest pictures - the most interesting stories and research on our sport... Join us on our Newsletter

Join the Newsletter
Back To Top
×