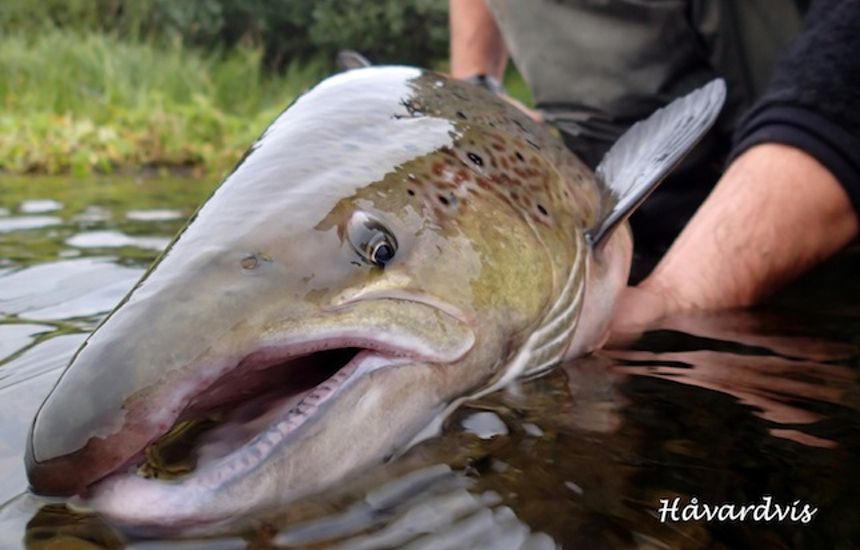 Salmon season 2013 at the Kongsfjord River
Just in time for the start of season 2013, I received my selection of tube dry-flies from you – They were tied perfect and float great – I have had the greatest success with light-coloured Bombers and the Monster Tube Caddis.
During the season I often witnessed how salmon would rise to the Monster Tube Caddis multiple times…without breaking the surface… I then trimmed the tail of the fly – with success in form of a solid hook-up
One morning in late July, I arrived at a pool that almost always holds salmon. The pool has a fast narrow inlet with fast water extending further down into the pool. Here I have found that the procedure is to add the dry fly to the edge of the current and let it run down – on both sides.
This morning I started at the bottom on the east side casting upstream along the edge. The previous day I had had salmon up for the Monster Tube Caddis. Already on the third cast, I had a salmon up for the fly – I hooked it. Some minutes later she was safely unhooked and returned to the river. A female salmon of 76 cm (30 inches).
More fish was showing when I took a coffee break in the sunshine and was soon fishing again – First the eastern side with no results, then the mid-current of the pool. Still fruitless I waded across to the west-bank to be able to fish the fly somewhat slower – A few cast later I had hooked yet another female salmon. This one at 85 centimetres and also safely returned. A perfect and wonderful morning up the river at the end of the world.
This season also gave me the opportunity to fish with friends and seeing one of them catching his first-ever dry-fly salmon – What great days this summer…catching salmon in the very north of Norway
I’m looking forward to next season with more dry fly for wild Atlantic salmon – Lots of greetings to Jesper and Per at Fishmadman!
Best Regards
Håvard Vistnes