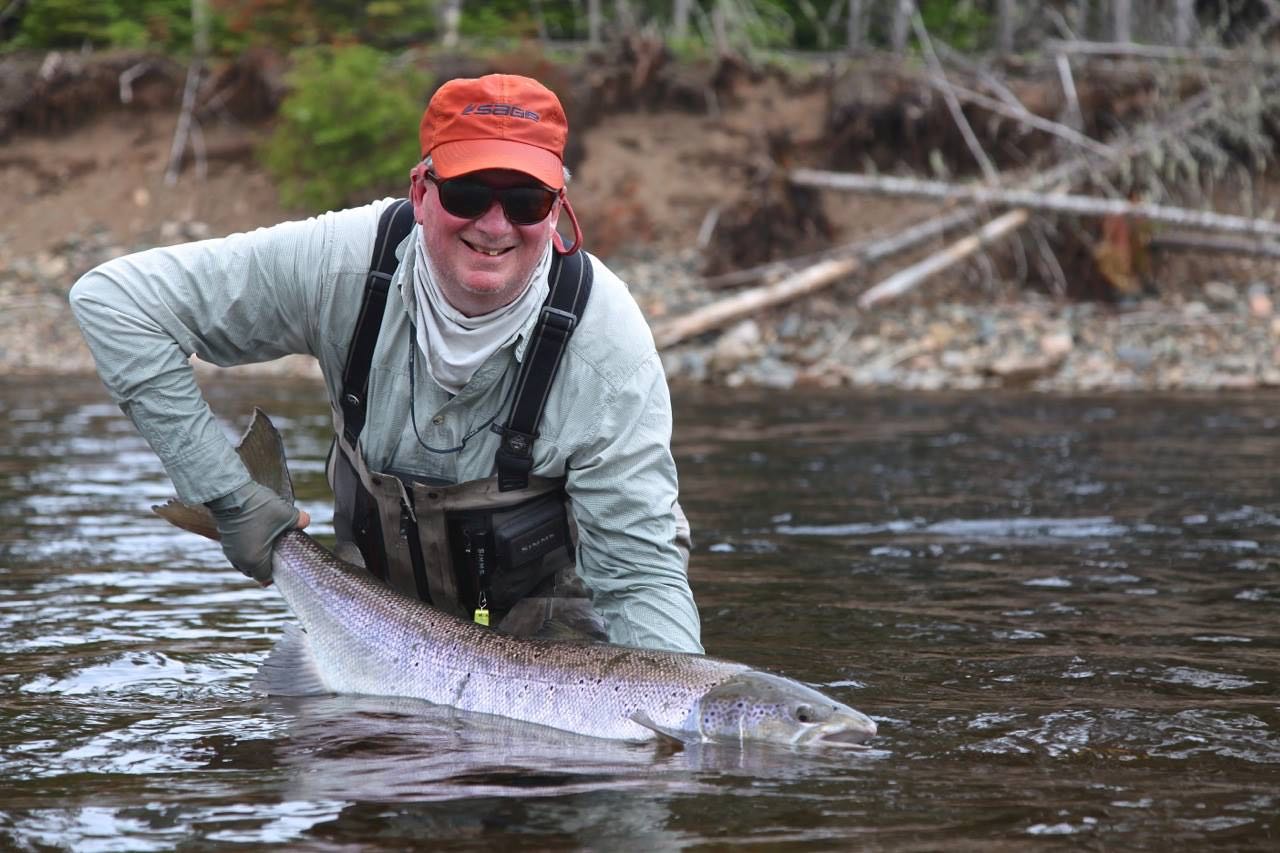 Hi! Per and Jesper!

Many thanks for the set of Monster Tube Caddis received from you last spring. The salmon of several rivers in Gaspésie was quite impressed with The Monster!

In early July 2015, Jane — my wife — and I fished the upper Cascapedia River in the Chic Choc mountains where our pool for the morning held some fine fresh salmon. Straight away, Jane hooked into a good hen fish in the rapids at the top of the pool, on a popular local wet fly, the Picasse. After several leaps in the clear mountain sunshine, we tailed and then released the silvery hen of about 8 kg.

The lower part of the pool had some eddy and slack water close to our shore, and after a few casts, it was clear to us that the wet fly wouldn’t swing well at the present water height. We decided to work upstream from the tail of the pool with dry flies, searching for receptive fish among the large rocks barely visible in the brown-tinged water. Working without any response around a rock which had given me a salmon on one of your tube Bombers (natural/orange), I fished up into the deeper water, wading up to my waist and casting a long line over the back eddy. Suddenly a salmon sharked down my Monster Caddis tube, and I felt the power of the fish as it surged into the current, but then, nothing. The hook had not taken hold. It was disappointing, but still encouraging to know there were taking fish in the gut of the pool.

I rested the water for a few minutes, then resumed casting in the same area of the pool. Only a few casts later, a large salmon took the Monster Caddis in an explosive leap, and the line went tight in mid-air! The fish leapt over the water, stitching in and out of the water surface with half a dozen consecutive jumps going straight upstream before I could turn its head and recover line. As I worked the salmon closer, still standing in quite deep water, I could see it rubbing against the rocks of the bottom, and hoped the leader would hold. The MC had ridden up the leader, out of harm’s way. With no net, and not wishing to beach a salmon that I would release, I brought the salmon to hand and fumbled ungracefully with rod, salmon, and forceps to remove the fly. Measuring the large hen against my rod, while holding it in the water, I carefully noted the length mark, and then watched the heavy fish swim into the depths of the pool.

At the shore, Jane and I toasted the salmon and the Cascapedia River with a little malt, and I took a measuring tape to the mark on the rod. Forty-three inches (109 cm) of Cascapedia silver. The Cascapedia Society, which administers the fishery, kindly provides a length-to-weight conversion table for both male and female salmon, and this hen fish would have tipped the scales at about 36 pounds, or 16 kg, my best salmon on a dry fly.

The photo of this fish was traced onto a rough pine board, cut out, and hung on the wall of released memorable salmon back at our chalet to encourage optimism, hope, and perhaps just a little envy from our fishing friends and visiting anglers who stay at Les 4 Saisons, seeking their own magical moment on the river.

PS please send more Monster Caddis — my friends have stolen all of mine!