The Sunray Shadow one of the most famous tube flies ever made. Designed by late UK angler Mr. Raymond Brooks in the 60´s – Sunray Shadow is a must-have fly in the fly box for anglers pursuing fresh giant salmon on big river systems. 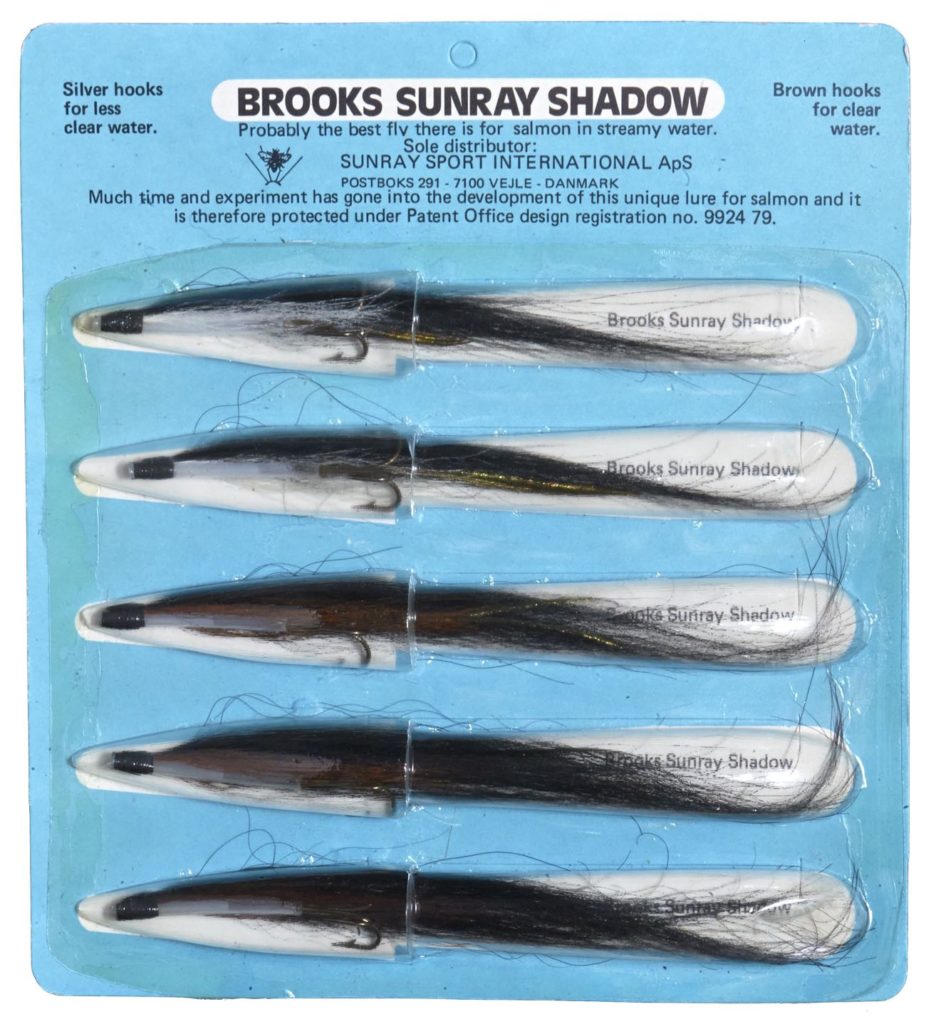 The Sunray Shadow or Brooks Sunray Shadow is yet another mythical fly and a must-have in the salmon fly box. Originally designed by late British salmon angler Mr. Raymond Brooks (Ray Brooks)

In the early 60´s Ray traveled through Norway to find the perfect salmon river. He did so with his wife Margit, and they found the rivers in the districts of Møre & Romsdal where they fished for many years.

Right: Brooks Sunray Shadow how they ones were sold in stores across Europa

Ray and Margit had a timber log cabin build at Hellesylt by the Korsbrekke River. To let the salmon reach further into the river system Ray had three different salmon ladders made. 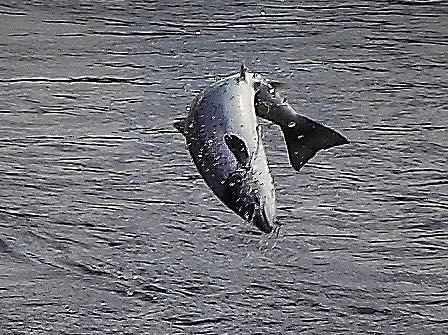 Every summer the Brook´s would fish the fantastic Årøy (Aaroy) River that yields the biggest average weight of salmon on earth, but their favorite of rivers was the majestic lærdal (Laerdal) River that runs to the Sognefjord. A river that had a historic run of big Atlantic salmon and sea-trout.

The Laerdal River the cradle of the Sunray Shadow fly

The Lærdal River is gin clear and of medium size which made it possible to cover the river from the bank.

Tubes designed for the purpose

The flies were tied on tubes designed exclusively for the purpose, consisting of an inner and outer tube, allowing a tube fly hook to rest in the back-end of the tube.  Hair from a monkey was used in the design of the wing. The monkey hair came out of a carpet that friend and fellow angler had in his living room. Later Ray found a supplier of the hairs needed and finally also made a registered pattern on the fly that he named: The Sunray Shadow.

The Sunray Shadow fly was tied commercially for the Brooks family by Danish company Lawcock and later with fly tiers in Singapore. 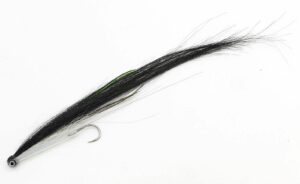 The Sunray Shadow: Ones made with hair from Colebus monkey, today anglers will substitute monkey-hair with material like goat that will work just as well.

Left: Fly shown is made with Kashmir goat hair.

Numerous + 20-kilo salmon has been caught on the Sunray Shadow among other a 25 kilo (55 lbs.) giant from the Alta River – A 21 kilo (46 lbs.) fish caught in the Lærdal River by Mark Brooks the son of Margit and Ray. 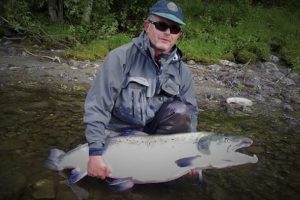 Right: The list of big fish caught on the Sunray Shadow fly is long – Here is a photo of another serious giant of an Atlantic salmon caught in Northern Norway by Mr. Jens Olav Flekke 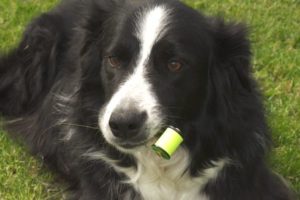 Hair from dogs can defiantly be top-notch fly tying material but it is illegal to sell hair from dogs or cats in Europa – so if you can get your hands on some long-haired canines it is worth your while sweet talking the owner into a bit of trimming. The Collie dog breed comes in many shapes and colors I prefer to be sociable with these two critters: Border Collie  or Rough Collie 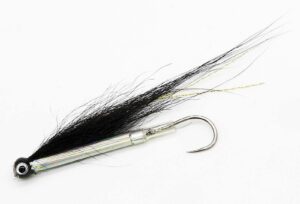 Collie Dog and Sunray Shadow are fly patterns closely linked with long-winged flies, and you will find variations of these famous salmon tube flies in fly fishing shops around the world. 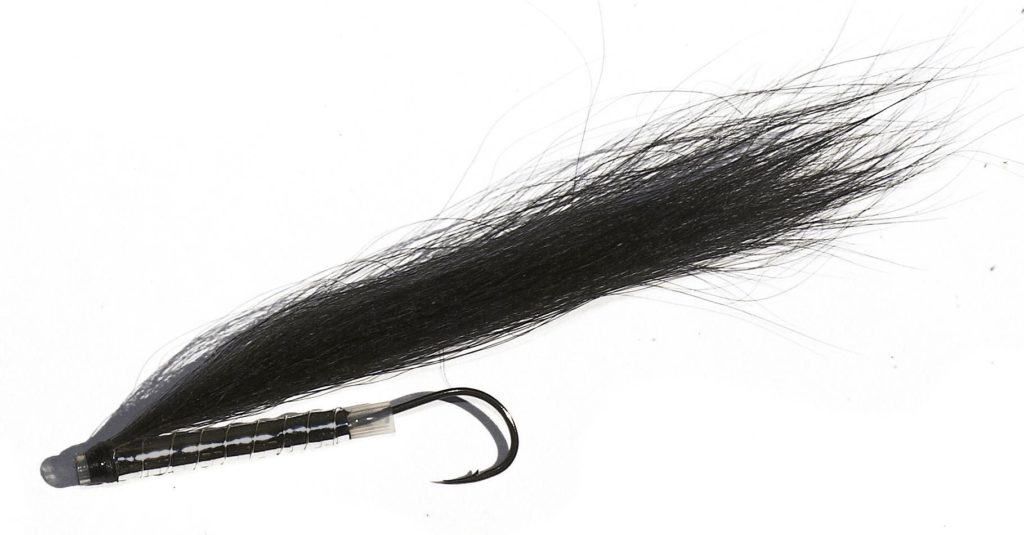 The Collie Dog fly is an old Scottish fly pattern designed in the late 19th century.  It was probably one of the very first, if not the first hair-wing salmon fly ever, to be deployed on a salmon river.

Still today it`s argued whether it is UK or US anglers who rightfully can take the claim for the salmon hair-fly project? 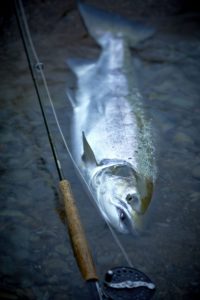 Above: a version of the Collie Dog fly actually tied with hair from a Border Collie

The Collie Dog was originally designed to be tied on double or single hook`s – Today most Collie Dogs is tied on tube – with or without the silver body. As hair from Collie (Border Collie) can be hard to get, most anglers will settle for quality hair from goat like the Kashmir Goat

See Kashmir Goat in our shop 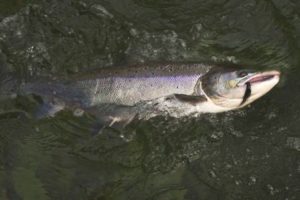 Tube flies with a long wing like the Sunray Shadow and Collie Dog is unique flies in the world of salmon flies. Flies with a simple expression favored on many rivers across the Northern hemisphere.

These flies with their wavy wing can have a hypnotic grip on salmon. Presented correctly the salmon will go to great length to intercept a fly like the Sunray Shadow or Collie Dog, often chasing the fly across the river – hitting it in a spectacular manner much in the way they attack a wobbler, spoon or spinner – When fishing keep your eye on the fly and bring it all the way into the bank…this is one fly that salmon will stay with all the way – and it might hit it the last second. 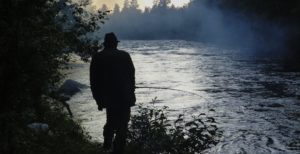 Big tube flies is often associate with salmon fishing in the witching hour … but they can be used in all kinds of fishing situations. 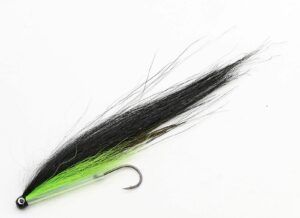 When fishing close to the surface with long-winged flies, anglers often see the salmon reacting to the fly by splashing or waking, something that can be quite useful – when you actually want to find out if the pool holds fish or not. Flies like these are also named: lifters or Reaction flies… 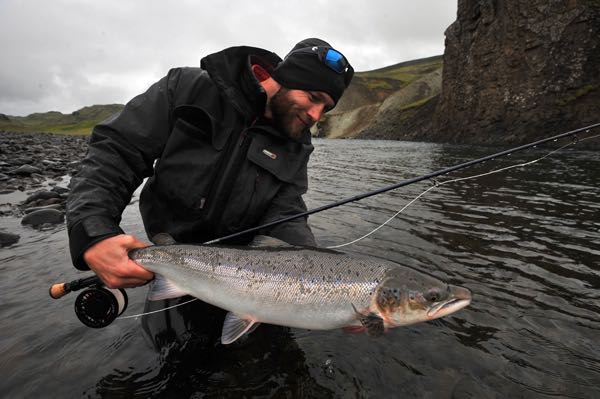 In Iceland, the Sunray Shadow will also be used as an Attention fly, fished over lies that might be unproductive or over-fished – The Sunray Shadow is then replaced with a much smaller pattern and salmon will very often come to the surface. 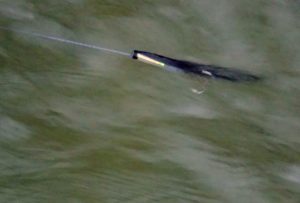 When summer arrives and water starts heating – speed seems to be a key element with these long wing flies, and anglers will fish it in different ways to generate speed – This could be done with floating or intermediate line fished straight across the river. By hand-lining the fly back, fast – in long pulls. By mending the fly line downstream to generate a belly, thereby increasing the pull on the fly line and so the speed of the fly.
I have many times used this technique during summer/autumn and seen how it may work wonders for a short time – then suddenly to lose its effect completely. 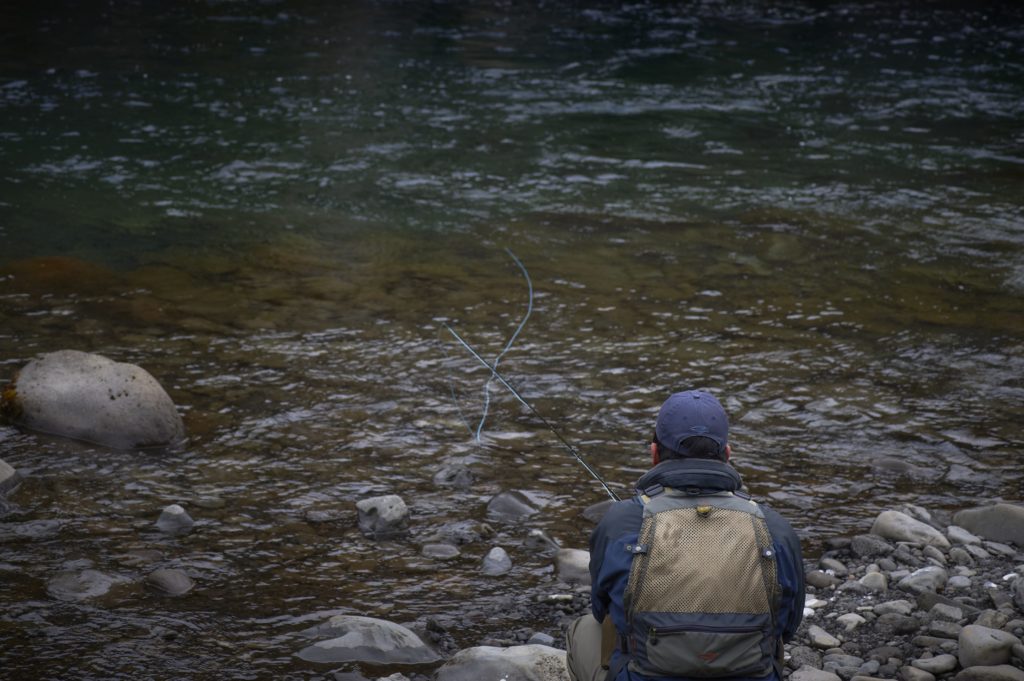 Right: Fish the Sunray Shadow or collie dog fly on a 90 ° angle and pull the fly – in jerks – as fast as you can across the salmon lie – Don´t worry about overdoing speed – the salmon is much faster than you. A good trick is to completely stop and leave the fly motionless – when you come close to your rod tip – the salmon will very often take the fly in a big splash or jump

Strike when it jumps

If you see fish jumping in the path of your fly – it will most certainly be the salmon that has grabbed the fly – I always strike when I see the fish jumping – 9 – out of 10 times I hook the fish..and it will go ballistic after such a hooking …so be prepared to clear the line fast out the guides after hooking-up

Pulling the Sunray or other long wing salmon tube flies fast across the river – even having the fly jump through the surface is an extremely efficient way of connecting with salmon – And big and small fish may follow the fly trying to grab it in high jumps.

Sometimes I just stop pulling in line when salmon chase the fly – I just leave it still in the water surface – and wait for the salmon to grab it.

Stripping an Iridescent Sunray Shadow… fast as you can… across the river can in times of fresh running fish be one of the most productive methods you can use – but take care it is yet another all-absorbing form of fly fishing that may take up your time and ruin your sleep.
See flies in our shop 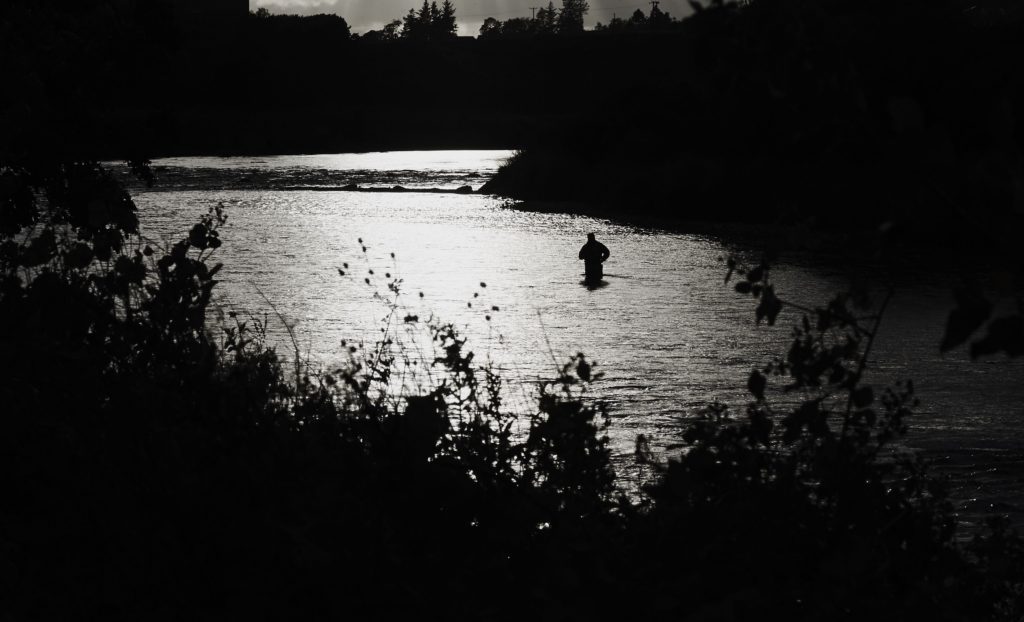 When fishing in colder water it is advisable to fish the Sunray Shadow or Collie Dog fly slow and make sure to present it to the fish for a longer time. Use intermediate lines with sink-tip or even full sinking lines to fish productive fast water. 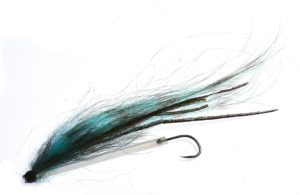 Big is not always better and particularly not when it comes to salmon. In relation to this it is well worth keeping different sizes of these special flies in the box – Although a 2 inch Collie Dog or Sunray Shadow might seem big when other anglers work with tiny # 10`s – 12´s in hot water – it can still be surprisingly efficient to use these flies fished very close to the surface. 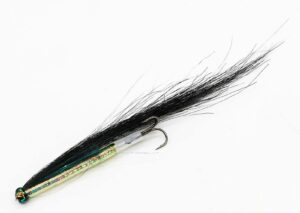 We use a selection of flies in the range from 2 – 6 inches. The 3 1/2 inch version being the regular fly on most rivers, and the smaller versions for low water summer conditions – The bigger flies are made for early season fishing and even in low temperature; 5 – 6 degrees Celsius (41 – 43 degrees Fahrenheit) – salmon will come right to the top to grab them

See other big Sunray Shadows in the E-shop 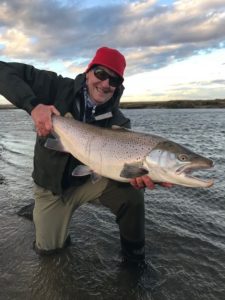 We do a line of very small Sunray Shadow flies that we recommend anglers to bring for summer conditions and difficult fish – small simple interpretations of the original tube fly suited for floating line and light gear.

This is what fly angler Bill (Beatle) Abshagen from Colorado used when fishing Despedida Lodge in Tierra del Fuego Argentina Fish were actually eating small Skuds (14 & 16’s), but this fish was hungry, and couldn’t resist an appetizing smaller Sun-Ray. 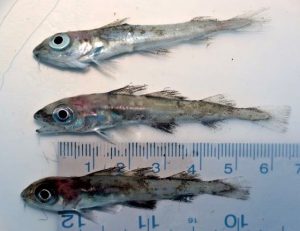 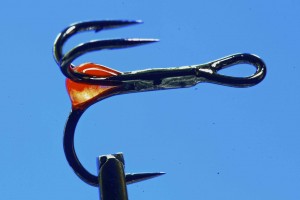 Fishing with these special flies is an action-filled sport and you will feel fish pulling and hitting the fly during a fishing session – Ever so often these same fish will have a go at the fly more than one time – as long as they haven’t touched the hook.

Getting the wing caught up in the bend of the hook is an inevitable part of fishing flies with long soft hair and to make sure everything is working as intended, one has to check the fly on a regular basis – Obviously an annoying hassle – but it is well worth the effort to put the time into the long wing project.

See our range of hooks 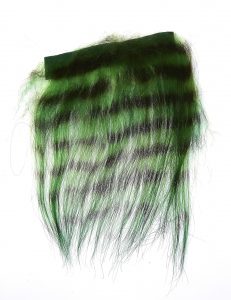 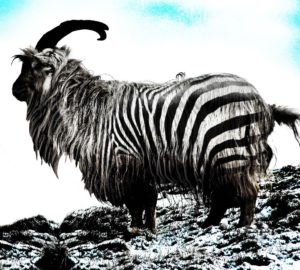 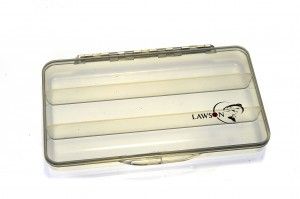 The perfect dimensions – strong and inexpensive

We hope you liked the story on the Sunray Shadow - We like to think of stories like this as; fly fishing forensic - We try to gather as much information on flies and there makers... Follow our work through our Newsletter that we publish 3 - 5 times a year - when we find something interesting to share with you

Join our newsletter
Back To Top