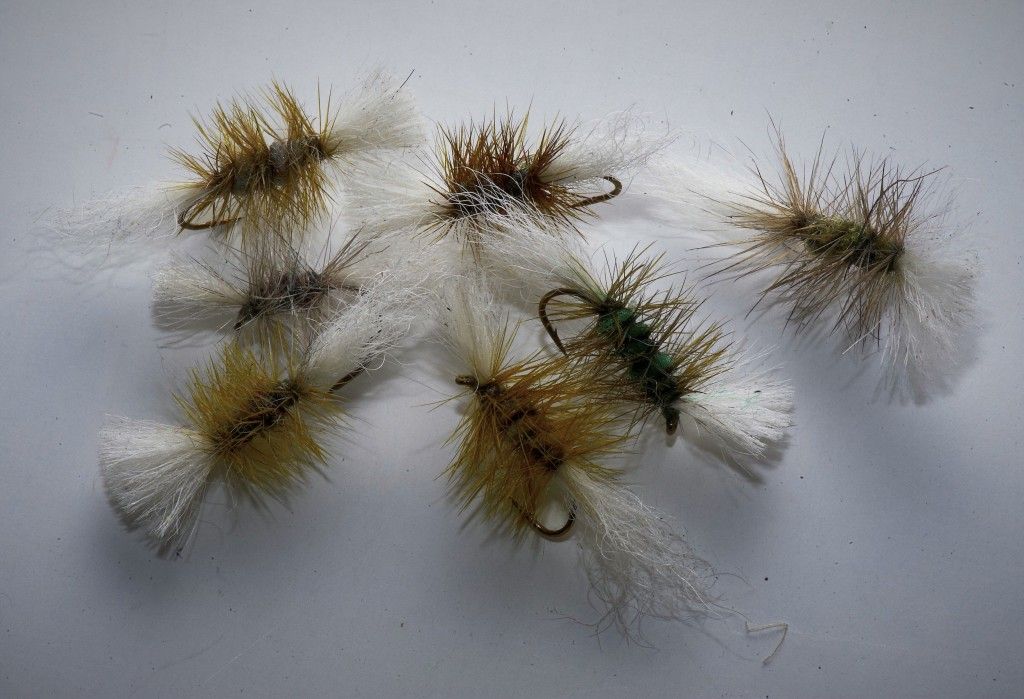 A collection of Pompero flies tied by Mr. Anttonen. These are # 6 flies in favored green and olive colors used on clear salmon rivers in the far North of Norway. Note the broad cut fan-wing 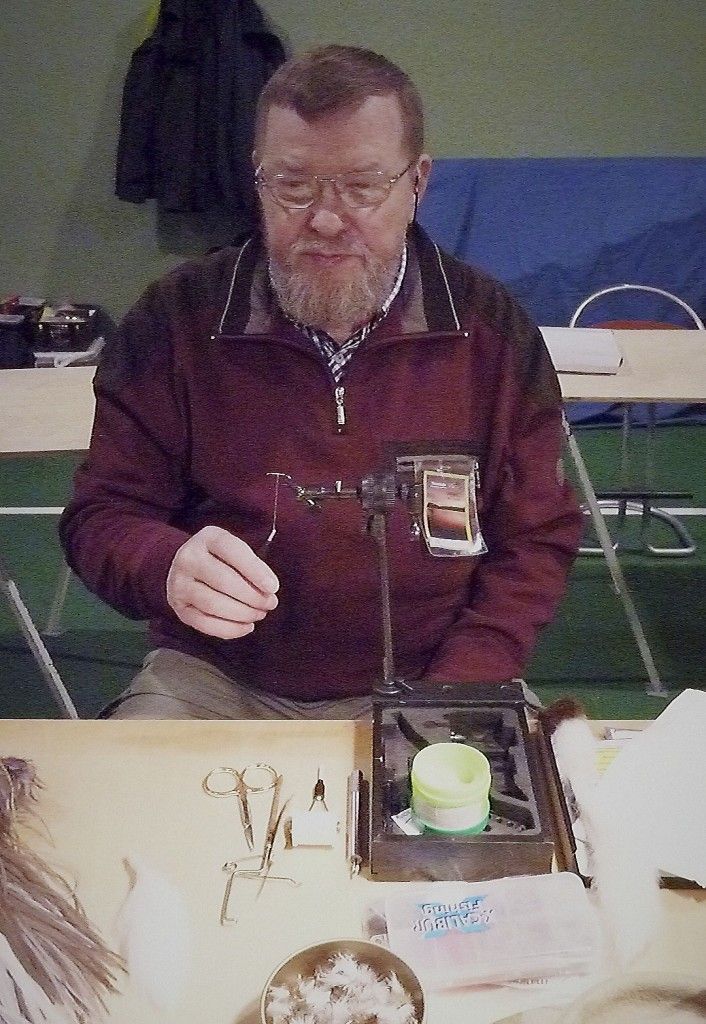 Mr. Heikki Anttonen is a dedicated fly angler from Finland that through his life has developed salmon dry flies – We had the fortunate opportunity to meet Mr. Anttonen this spring (2013) and was able to learn the story behind one of the most famous salmon dry flies from Scandinavia the Pompero Fly

How it all started

Heikki Anttonen or: Mr. Pompero as he also is called in Finland lives in the Finish town of Valkeakoski – He was born in the town of Simpele where he started his career as angler –

Read Mr. Pomperos own story of how he came to be a salmon angler and dry fly pioneer 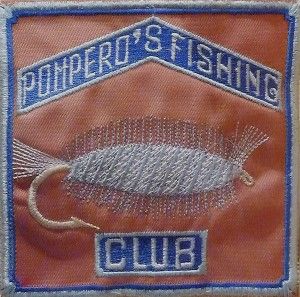 I started to tie flies when I was seven years old, even then my fly patterns were unique, but perhaps they did not meet competition-tying standards. The hooks I used were coarse fishing hooks and feathers came from my grandma´s pillows (in rural Finland pillows were stuffed with game bird feathers) My rod was made from the stem of a young birch tree and my line was only a bit longer than the rod.

The main thing was that I caught fish, mainly whitefish which were many in the stream below the paper-mill factory. Anyway, I was hooked!

I had read about trout fishing and I wandered to my local small streams where a scarce population of trout lived. Often my bag was empty bag, but sometimes I would catch one or two of these beauties. As time went by my flies got better, my equipment also improved and my fishing waters grew larger.

The year 1964 marks the beginning of salmon fishing, this happened by the river Neiden, in Norway. Now a place I do at least four weeks of fishing every year.

To begin with I fished with normal wet fly fishing but one day I got some flies from my aunt in America and these flies led to me tying my first dry flies in 1976. I used calf´s tail, cook hackle and some yarn my mom used for her rugs (this material later proved to be polypropylene).

In the beginning of these experiments I used deer hair, but it seemed complicated and messy, so I left out the hair.

The first remarks from fellow anglers seeing me tying a Pompero fly on my leader were rather pitying, but as time passed and the number of salmon caught on the Pompero Fly increased (630 this far by yours truly) – the tone has changed. And you should have seen the ones that got away…

How to tie The Pompero Fly 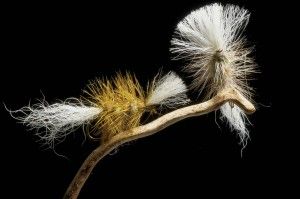 NB. I make the poly dubbing by cutting 1cm bits of poly-yarn of different colors and mixing them thoroughly in a coffee grinder (even though light navy gray is the basic Pompero color).

To improve floatability; apply a waxy floating agent on the materials as you tie them in, I use the Finnish product Nahkiss

Make a spinning loop (15-20 cm. 6-8 inches) and set the loop in the midsection of the hook-shank – and bring your main thread back to the tail section.

tie the hackle in ( by the tip) at the tail, make two turns to the shank and the bring the hackle back to the front in tight turns and make two even tighter turns at the wing or fan to be made of the calf tail waiting there. Tie the hackle in with the awaiting remains of the loop.

Bring the thread to the front reinforcing the body hackle and push the calf´s hair up to form a fan–like front wing.

Form a neat head in front of the fan so that it stays in the right position. Whip finish and cut the thread away.

take the fly off the bench, eye up and squeeze the fan together and cut to final length

check the hackle, spread the fan and perhaps push it up a bit.

Sight fishing for salmon is my preferred style. Cast the Pompero Fly to the upstream edge of the fish´s window, inside it so that the fly is seen by the fish when it lands on the water. Let the fly drift tail first freely downstream straight over the fish. When the fly has passed the fish by a meter (3-4 feet), cast again. Lots and lots of short casts with a dead drifting Pomperos fly, that´s my way of fishing.

If fish can´t be seen, fish your “hotspots” in the same way.When the fish rises, don´t panic, wait until it turns before you lifting your rod!

Even when you use one hand (one and a half) rods, some 10-11,6 ft. long, it´s hard work. Fishing the Pompero for salmon is a question of faith, only the fly on the water catches fish! 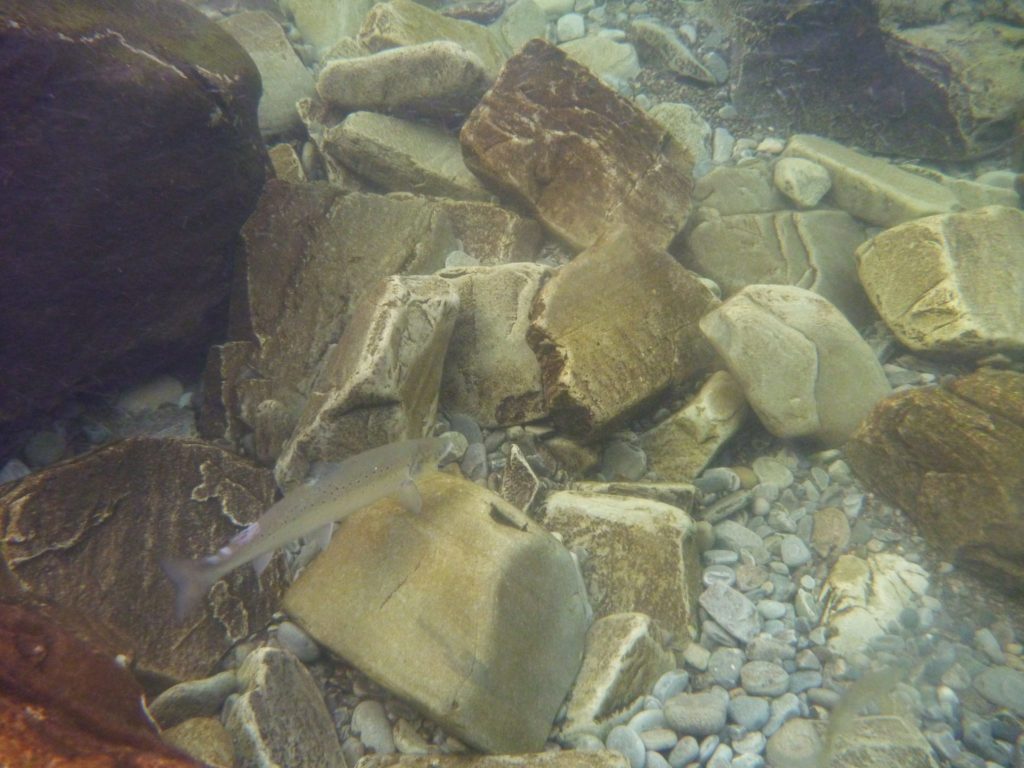