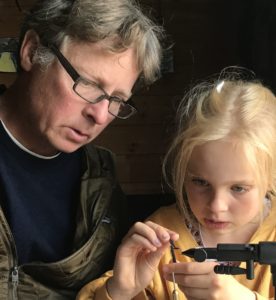 I personally look forward to the upcoming season and I am sure we will all be able to get out and enjoy fishing sometime very soon.

I have chosen to spice our newsletter up with a fishing-cartoon… just to get some smiles going in these Corona times.

Tight lines from us at Fishmadman – Jesper & Per

The Soldier palmer belong to the range of grub and shrimp flies. These flies are often associated with stale water fishing but these flies are much more than that

The Ullsok (the woollen sock) is one of the most if not the most famous Swedish salmon fly ever probably because this fly is so efficient for trout and salmon in the equally famous Mörrum River. The Ullsok fly is similar to grub patterns like the Soldier Palmer and flies like the Glow Worm Fly and is found in many variations.

A nice May salmon from the Swedish river Morrum, also caught on the Soldier Palmer – Most anglers at the Morrum river fancy grub flies for their salmon and sea trout fishing. Smallish flies that stand in contrast to the Spratt,  herring, and sandell the baltic salmon feed on in the sea.

Read more about what the salmon eat at sea…Look here

Burt Longcaster a man on a mission

It’s with great honour I introduce one of my favorit cartoon characters: Burt Longcaster. As the name describes an angler with immense casting abilities. This particular cartoon was published in the mid-’90s in the Danish fishing magazine Fisk & Fri…In a later edition, Burt Longcaster throws a stray puddle-dog around the globe to mainland China… where it is eaten…sadly that adventure never made it to the funny pages…due to editorial ding-dong

We chose to make some treble hook flies for season 2020 – all tied on the fabulous Partridge Esmond Drury treble hook …all tied to perfection …dressed just like we want them – Found in two sizes: # 12 and # 6 See all flies from the series here

A fantastic fly – Modern material and perfect styling for those clear water salmon rivers in the North of Norway and Russia. We have tied it exactly how we think it should be made. Superior Partridge Esmond Drury gold plated treble hook.

Whitney Houston is the most awarded female artist of all time.. The late Mrs Houston has a very good salmon fly named after her. Every Scandinavian salmon angler I know has this fly in her or his fly box, some anglers also refer to this fly as The White Ponoi. We have tied it exactly how we think it should be made. Superior Partridge Esmond Drury gold plated treble hooks is the fundament for this fly.

The Bann Special Shrimp salmon fly is one of the best-known shrimp flies from the British Isles – Its origin is as the name indicates from the Irish river Bann, with 129 kilometres the longest river in Northern Ireland. It’s a fly that workes well in both fast and slow water and it is also known as a great pattern for coastal sea trout. This is our cut on this famed pattern..with a body of wool, checks of well-made jungle cock imitations made by guinea Fowle feathers all tied on a good Partridge Esmond Drury treble hook

You asked for them and we made them for you… Bug´s made specifically to be fished both wet and dry. A slightly stronger salmon hook enables this fly to be fished just below the surface in fast glides – A missing link pattern in our great collection of small dry flies for steelhead and Atlantic salmon generally termed: bugs. See all the bugs here

THE SMALL DENS FRANCES FLIES…You got to try them…

Frances Micro conehead Tube Fly – Olive 1/2″  – We have made this new and great version of the famed Frances shrimp fly. Tied on a light 1/2 aluminium tube, dark olive wool body and an olive hackle all finished off with a micro brass conehead – The fly also features our great hook guard See it here

Lee Wulff was the modern forefather of dry fly fishing for salmon and his influence on salmon dry fly fishing and the flies we use is visible on most rivers where salmon run. We have chosen to have a range of Lee Wulff style Bombers made in a way that resembles the style of flies Lee Wulff would use in his fishing…relatively short and bulky with a dens hackle…tied on strong chemically sharpened hooks

We finaly have them

A truly great way to make loops on your shooting line

If you use shooting lines like SlickShooter from Rio or Ken Sawada Flat Beam… then you’re surely going to like this knot that I have used sins 2000 when my friend and topwater specialist; Mr Eric le Guyader learned me how to tie it.

The knot is called something like: le noeud du vieux pêcheur in French or:  The Old fisherman’s knot. Eric did not know its origin but had used it in his own fishing with great success.

It’s simple and easy to learn knot and it gives you a solution that both is slick and easy to pass through your guides and at the same time makes a loop that is dead-center on the shooting line …something that will balance your outfit better than other common loop knots…Try it and add a great new knot to your shooting head system.

If you have any questions in regards to this knot or shooting heads in general …I will be ready to answer any questions on jesper@fishmadman.com

Tight lines from Per & Jesper